I love anything with Pumpkin. I saw a recipe for Pumpkin Cinnamon Rolls recently and tried it. It turned out ok, but needed tweaking. Since then I’ve worked on tweaking on them and have finally gotten them right. Served them today at breakfast and they were a huge hit. Enjoy! 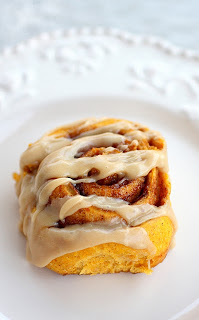 In a small bowl dissolve yeast and 1 tsp. sugar in warm water, set aside.

In a small saucepan, heat milk, butter and pumpkin just until warm and butter is melted, stirring constantly.

In a large bowl beat the eggs just until blended, and add the sugar. Stir in the milk, butter and pumpkin mixture.

Sift 2 cups of the flour, nutmeg, pumpkin pie spice, and salt into the wet ingredients and stir until combined. Knead in 4 cups of the remaining flour, and if the dough is too sticky, add a little at a time of the last 1/2 cup if necessary.

Spray a large glass bowl with non stick spray, place top of dough ball in bowl, and flip so the greased side is now on top. Cover loosely with plastic wrap and place in a warm place until doubled, about 1 hour.

Once dough is doubled in size, roll out on a floured surface to a 12″ x 18″ rectangle. Brush with the 2 Tbsp. melted butter. Combine the brown sugar and cinnamon and sprinkle over the melted butter. Roll up jelly roll style. Cut into 12 pieces. Lay pieces cut side up in a 9″ x 13″ pan sprayed with cooking spray. Cover lightly with plastic wrap and place in a warm place for 30 minutes.

After 30 minutes preheat oven to 350 degrees. Bake cinnamon rolls 25-30 minutes, or until golden brown on top and the dough around each roll is just done.

Cut between each roll with a knife and allow to cool while making icing.

In a small saucepan heat butter until melted. Stir in brown sugar and milk. Cook over medium low heat for 1 minute.

*If you don’t have pumpkin pie spice you can make your own. This is more than a tablespoon, but I will make lots of it and store it in a small jar with my spices so I have it on hand whenever I need it.