On June 23, 2012 a major wildfire broke out in Waldo Canyon in Cascade, Colorado, just west of Colorado Springs. The fire ended up being the worst fire in Colorado’s history. Due to erratic winds, record breaking hot temperatures, and extreme draught for the past 2 years, the fire grew to epic proportions in just a matter of hours, and within 3 days a firestorm that was unprecedented erupted in Colorado Springs which caused the loss of 346 homes and 2 deaths in the Colorado Springs neighborhood of Mountain Shadows. It was a tragic day for our entire community.
We at Rocky Mountain Lodge & Cabins were extremely lucky, however. It was “business as usual” for us as one family reunion had checked out and we had just finished cleaning the Lodge, ready for our next Colorado Springs family reunion to check in when our housekeeper, who had just left, called and said that there was a huge plume of smoke just a couple miles from us as she was driving down the pass.
Brian and I stepped outside and saw a huge smoke column on the other side of the ridge behind our properties. In less than half an hour Brian said we should start packing our bags. Being the optimist I knew the firefighters would be on it and would extinguish the fire quickly and there was no imminent danger to us or our properties. I threw some laundry in the washing machines and started to slowly pack up some pictures and photo albums. Within minutes we received a reverse 911 call telling us we were on “voluntary” evacuation (another term for “pre-evacuation” or “evacuation stand by”). We turned on the TV to watch the news and saw that the fire was spreading incredibly fast, and we did notice the smoke plume by us growing larger by the minute. My previous blog post shows the video Brian shot about this time, and with urgency he told me to get packing as he started to quickly pack up our cars.
We received a second reverse 911 “voluntary” evacuation call about 15 minutes later. As Brian was packing up the car shortly afterwards we started to see flames crest the ridge of the mountains behind us and we knew we had to leave quickly. He called 911 to tell them the flames had crested the mountains, and within a couple of minutes the siren from the Cascade Volunteer Fire Department, just a couple blocks away from us, went off. We have only heard the siren one other time during the 10+ years we’ve lived here, and that was on the anniversary of 9-11. A couple minutes later we received another reverse 911 call saying we were on mandatory evacuation and were to leave immediately.

I then knew it was time to finish and get out as fast as possible. I grabbed my wet laundry and threw it in a trash bag and packed up the last of the office stuff and threw whatever other clothes I could grab in about 10 minutes into a suitcase.

We also had to make sure all of our guests were evacuating as well during this time. When we got the voluntary evacuation notice we notified all of our guests. One of them were on their way back from Canon City after enjoying the Royal Gorge Route Railroad. They were on their way back but weren’t sure how long it would take them. After we got the mandatory notice we told them if they weren’t here in 30 minutes we’d grab their things and meet them in Colorado Springs. They made it back in just about a half an hour, and in a surreal last look at our properties, we drove away, praying our places would survive the fire. As we were driving down our road two Sheriff’s office vehicles were beginning to go door to door to make sure everyone was leaving.

We drove to our daughter’s house in Colorado Springs and were planning to stay with her, but on our way to her house she heard word that the neighborhood next to hers (the Mountains Shadows neighborhood) was on evacuation stand by. She and her hubby decided to pack their cars up and head to her mother-in-laws on the east end of Colorado Springs. We went to her house and helped them pack up a bit, then headed to our other daughter’s house north of Denver.

The next 9 days were full of anxious waiting, heartbreak for our community, and tremendous gratitude to the brave firefighters, police, media, and many more that were working so hard to get the fire out and save our lives, community, and beautiful mountain terrain.

After being evacuated for 9 days, we were able to return home on Sunday, July 1st. We weren’t sure what we would find when we came home… we knew our home and business were not burned, but from pictures we’d seen of where the fire burned, we knew it was much too close to our homes and we weren’t sure what to expect. Would we have smoke damage? Would there be soot and ash on everything? Would the dirty laundry from the guests that checked out be moldy and ruined? I must say, you think of all kinds of weird and seemingly stupid things when you have all this time to think and worry and wonder and hope.

As we drove home, we were anxious as to what we’d see, our hearts were in our throats as we were driving up the pass. I was surprised that there were only a few spots that were noticeably burned while we drove up the pass… the majority of the mountains coming up the pass were completely untouched and you would never know there was such a massive destructive fire here.

Then we reached our town of Cascade. Some burn on the side of the road when you first get into town, but not much, and all the mountains on the south side, the Pikes Peak side, were completely untouched. When we got to the traffic light and turned into our neighborhood there were firemen waiting to welcome us back home. I couldn’t help but burst into tears of gratitude of thanks for the valiant and tireless efforts they went through to save our home, business, and community (mental note to self to get baking some goodies for these hard working folks… cinnamon rolls, cookies, and muffins by the dozens followed over the course of the next few days… really nothing compared to the gift they’ve given us). We turned onto our street and then saw our home and Lodge, still standing without a hint of anything that had happened over the course of the past 9 days. Our Cabins were also untouched. No smoke smell in the buildings, no soot or ash, nothing but a beautiful home to come back to. The worst “damage” we have is that the yard, plants, flowers and trees are pretty dry and crunchy from the extreme heat and not being watered for 9 days during such hot weather. We have MUCH to be grateful for!

Here is a picture I took on July 5, 2012 of the Lodge. Not a great picture as it’s from my cell phone, but you can see that the Lodge is untouched and the mountains are still as beautiful as ever. I will get other pictures of the fire up at some point, but here is what we look like now, after the fire (beautiful as ever and unharmed). 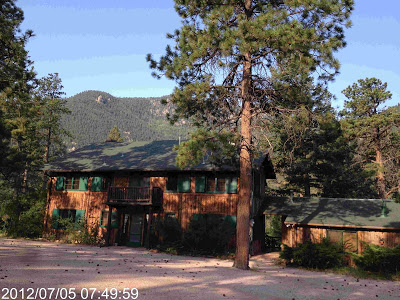 We have been blessed with beautiful mountain views both in front of the Lodge, our home, and our Cabins, as well as behind us. Sadly, the mountains behind us did burn, and the fires did come within 2 blocks of our properties, but we still have stunning, beautiful mountains views in front of us. You can still sit on the terrace, patio, gazebo, and in the hot tub at the Lodge, and on the patio and in the hot tub in the Cabin, and STILL enjoy the spectacular mountain views we had before. The mountains behind us are still there, but the view will change. Right now you can see the rugged mountains with charred burned trees and shrubs on them, and some green that wasn’t burned, but in time new growth will blossom and will create a new beautiful view for us to enjoy.

I’ve been going outside to look at the views every day since we’ve been back, as I did before this fire tore through our beautiful area, and I am so thankful that we still have such beauty to enjoy. I loved the beauty of where I lived before, but have an even greater appreciation for the beauty I still have today.

And I cannot thank all of our friends, family, and guests for all of the prayers, love and support you shared with us during this difficult time. We were overwhelmed by the outpouring of care and concern from so many of you. Thank you a million times over, it meant SO much to us!

It’s now back to “business as usual” with our guests, and we currently have a wedding party here at the Lodge and in our Cabins. We are open for business and welcoming guests.

Rocky Mountain Lodge & Cabins, Colorado Springs, Manitou Springs, Cascade, Woodland Park, and the entire Ute Pass are OPEN FOR BUSINESS! ALL of the area attractions, with the exception of Flying W Ranch, which sadly burned during the fire, are all open and operating. The Pikes Peak area is STILL beautiful, as the fire mainly ravaged the unseen rugged forest areas.

With that said, COME VISIT Rocky Mountain Lodge & Cabins and Cascade and Colorado Springs and see for yourselves the beauty that STILL remains here in the Pikes Peak region. Colorado is STILL a beautiful state, and there is MUCH for you to enjoy. We’re here to help you plan your Colorado adventure!