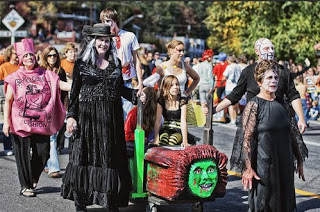 Manitou Springs, Colorado is known for a few wacky events, and the Emma Crawford Coffin Races and Parade are one of the highlights of year. Why coffin races? Here’s the story… 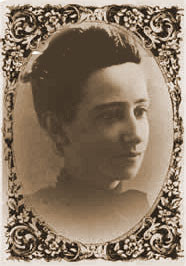 with a cure for her tuberculosis. Sadly, in the summer of 1890 Emma died quite young, just before she was to marry Mr. William Hildebrand, an engineer on the Pikes Peak Cog Railway. Her wishes were to be laid to rest on top of Red Mountain. Her fiancee and eleven other men began the arduous task her carrying Emma’s coffin up to the top of Red Mountain. It took them all day, working two shifts to scale the 7200 foot summit. After years of stormy weather on the granite mountain, the granite gave way and Emma’s remains were washed down the side of Red Mountain. Emma was later buried in the Manitou Springs Cemetery in an unmarked grave. An 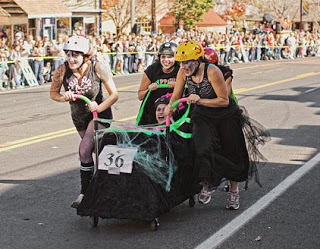 official grave site was granted to her in 2004 to honor her life. Emma supposedly still haunts Red Mountain to this day.

In honor of Emma, Manitou Springs hosts a local parade and coffin races each year. Participants bling out their coffins, dress as Emmas and other ghoulish characters, march in the parade, and then race down Manitou Avenue in one of the most popular events of the year, which have been featured numerous times on the Travel Channel and in Newsweek. A wake in Emma’s honor is also held at Miramont Castle in Manitou Springs the night before the races. 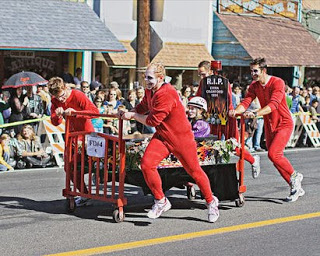 And while you’re here for the festivities, stay with us here at Rocky Mountain Lodge and Cabins in either our Colorado Bed and Breakfast Lodge near Manitou Springs, or our Colorado Cabin Rentals.
Error happened.