I made these Resurrection Rolls on Easter morning every year when my kids were growing up. Now my daughters make them for their kids. We also tell the Easter (Resurrection) story as we make them and read the scriptures from the Bible as we prepare them and eat them. Here’s the story: 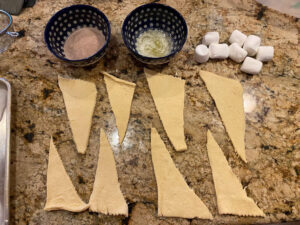 1. Read the following scriptures as you are making the rolls, stating: The crescent rolls represent the cloth that Jesus was wrapped in. The marshmallows represent Jesus. The cinnamon and sugar represent the spices used to anoint Jesus’ body. 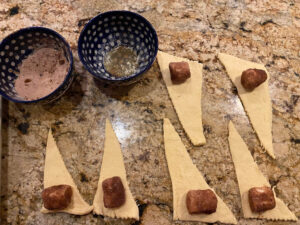 Matthew 27:57-61: “57As evening approached, there came a rich man from Arimathea, named Joseph, who had himself become a disciple of Jesus. 58 Going to Pilate, he asked for Jesus’ body, and Pilate ordered that it be given to him. 59 Joseph took the body, wrapped it in a clean linen cloth, 60 and placed it in his own new tomb that he had cut out of the rock. He rolled a big stone in front of the entrance to the tomb and went away. 61 Mary Magdalene and the other Mary were sitting there opposite the tomb.

2. After the rolls have baked, read the following scriptures while opening up the rolls, stating than when the tomb was opened Jesus was not there, as the rolls are “empty”, and He has risen! The oven represents the tomb.

Matthew 28:5-8: “5 The angel said to the women, “Do not be afraid, for I know that you are looking for Jesus, who was crucified. 6 He is not here; he has risen, just as he said. Come and see the place where he lay. 7 Then go quickly and tell his disciples: ‘He has risen from the dead and is going ahead of you into Galilee. There you will see him.’ Now I have told you. 8 So the women hurried away from the tomb, afraid yet filled with joy, and ran to tell his disciples.”

YOU CAN SEE ME AND 2 LITTLE HELPERS MAKE THESE LIVE ON OUR YOUTUBE CHANNEL BY CLICKING HERE!

This recipe, and 499 others, can be found in our cookbook “Rocky Mountain Lodge & Cabins’ MORE Favorites Recipes” which can be purchased at our Gift Shop.

And if you’re looking for a Colorado getaway, check out our Cascade Luxury Suite at Rocky Mountain Lodge in the mountain community of Cascade, at Pikes Peak, near Colorado Springs, Manitou Springs, Woodland Park, and Green Mountain Falls.